Here at the University of Texas at Dallas, we operate a repeater on 145.430MHz (K5UTD-R). For 5 years, it sat on the top of a 50′ tower, on a 50′ roof, giving us about 100′ feet above ground level. The end goal is to relocate this repeater to a higher tower on campus. This would make use of an antenna that is ~250′ AGL (if not a little more), as opposed to 100′ AGL. Moving this repeater took a lot of time and coordination, so in the mean time, I determined I would experiment with the APRS network to get a general idea of how coverage will change.

Is this an exact science? Not at all. The predicted coverage relies on many different variables; some are in my control, but most are not. The general principle is that you can make use of stations beaconing their positions, and compare the position packets you hear on one antenna with packets heard on the other. This will loosely correlate with the changes in repeater coverage when the transition is complete. This takes advantage of the APRS network, and the fact that many radio operators run GPS-based tracking systems in their cars. Data from these systems can be received on 144.39MHz.

To get an estimate of what the repeater can hear in the “pre-move” and “post-move” configurations, I collected two datasets at two separate times. The first dataset was using an antenna on the roof of the Engineering and Computer Science building. The antenna had similar height and gain to the old repeater antenna. Due to hardware constraints, I could not simultaneously run two IGates to collect data on both antennas. This is one source of error.

In this particular setup, the IGate consisted of a Raspberry Pi with the TNC Pi addon board. The radio was an Icom IC-229H, and would beacon two packets every 10 minutes (status/position). The APRX daemon was used to internally log and gate the packets to the internet. The log files are what I used to produce the map seen below.

Parsing the log file is no easy task. As you would have expected, there is a library written in Perl to parse APRS packets, so I wrote the script in Perl. I wrote several filters to only give me packets that I locally received. The filters discarded packets that have been digipeated, came in over the APRSIS servers, were not position packets at all, or had a distance greater than 150 miles. I also wrote in a filter that discarded packets with a speed greater than 100mph, as planes will skew the data.

The Perl script was written to spit out a KML file. It would take several minutes to run, as the log file is >113MB, but would result in a 6MB KML file ready for Google Earth. 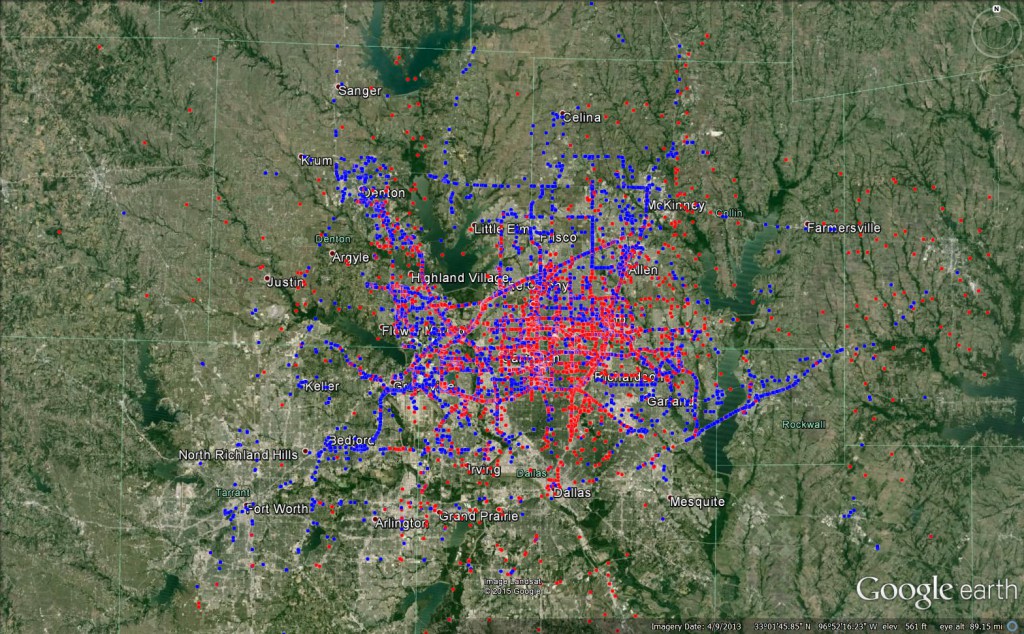 Anyway, it was a major project to move the repeater, and a lot of fun to write the script and produce the map while we had downtime. This type of map is easy to produce, and can be done by modifying my script to suit your needs.