In August, I built and flew a Raspberry Pi powered high altitude weather balloon. The Pi was ideal, as it provided a low power Linux platform in a credit-card sized package. Using Python, BASH, and caffeine, I was able to produce 1200 baud APRS packets to be sent through the audio jack to a Baofeng UV-3R. The Pi also took pictures using a webcam, and sent them out using Slow Scan Television (SSTV). This was sent through a Wouxun KG-UVD1 using VOX. This system worked very well, but there are plenty of design improvements to be made, so I need to start from scratch.

PiBalloon II it shall be called.

I came across a new balloon box as I was walking through a biology centric building on the UTD campus. 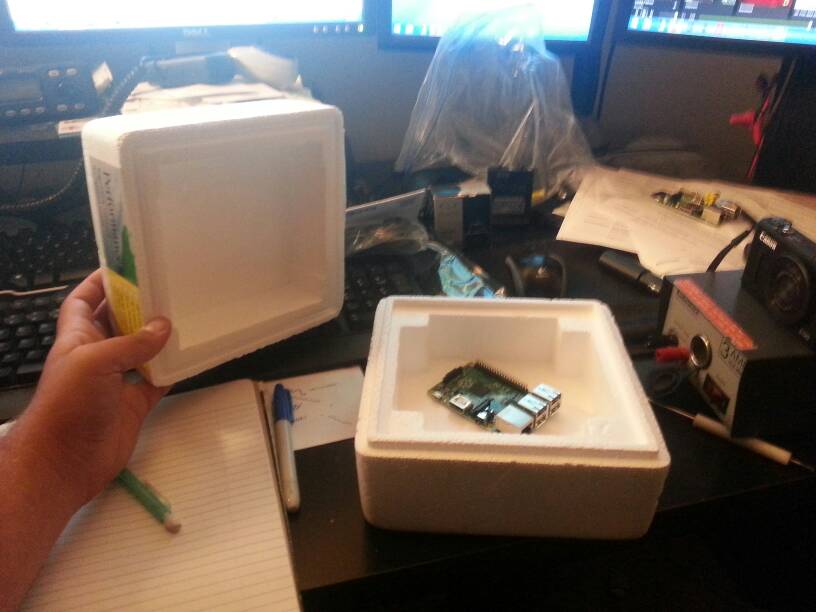 I didn’t have a banana for reference, but I did have a Pi B+. The box (externally) is 7x7x5.5 inches, giving me the perfect amount of room for a GPS module, Raspberry Pi, 2 D cell lithium batteries, a webcam, and these Baofeng-on-a-chip modules [DRA818V is the search term, if the link dies].

The Baofeng-on-a-chip modules are programmable via UART and can transmit at 27 or 30dBm (500mW/1W). I haven’t received mine yet, but I expect China Air Mail to provide in a week or two. Because they’re programmable via UART, it is theoretically possible to send SSTV on 144.5 and APRS packets on 144.39 using the same module. Admittedly, you can’t get APRS while SSTV is running, but it still has a lot of potential. My favorite idea is to program in the top 15 repeater pairs and the top 5 PL tones, and go down the list kerchunking repeaters from the edge of space. One could also program the Pi to announce its status on their favorite repeater using a speech synthesizer. “This is your Pi speaking. Our current altitude is 82,348 feet, and ascending. It’s a little chilly outside at -37 degrees celcius. Batteries are looking good. Go ahead and put your seatbacks and tray tables in the upright and locked positions, as we expect burst at any minute now.” The possibilities are endless with a radio that can be programmed in real time by a Raspberry Pi.

Similar to the last launch, I’d like to monitor several different parameters and send them out using APRS. I plan on building another 1-wire thermal sensor network using the Maxim DS18B20’s or similar. This time I’ll be using the real sensors, not the unreliable parasitic power units. The TI ADC didn’t perform well either on the previous launch, so I’ll most likely load up an ATmega chip to handle battery voltage monitoring. Ideally I can just feed data back to the Pi using a UART or other GPIO interface.

TI offers this chip called the TMP513. Check it out. It interfaces using I2C, and can measure battery voltage, three temperature sensors (and a fourth internal sensor), and even has a GPIO pin. Mouser has them in stock for <$5. If I can figure out how to use this chip, I’ll swap out the 1-wire network and the ATmega in favor of this. It has potential.

There is a possibility of a December launch. This group requests that the payloads be <2lbs and <12″ on any face. Size isn’t a problem, but weight might be. Hopefully the PiBalloon II will come out under that constraint.

Stay tuned for more updates on this project.